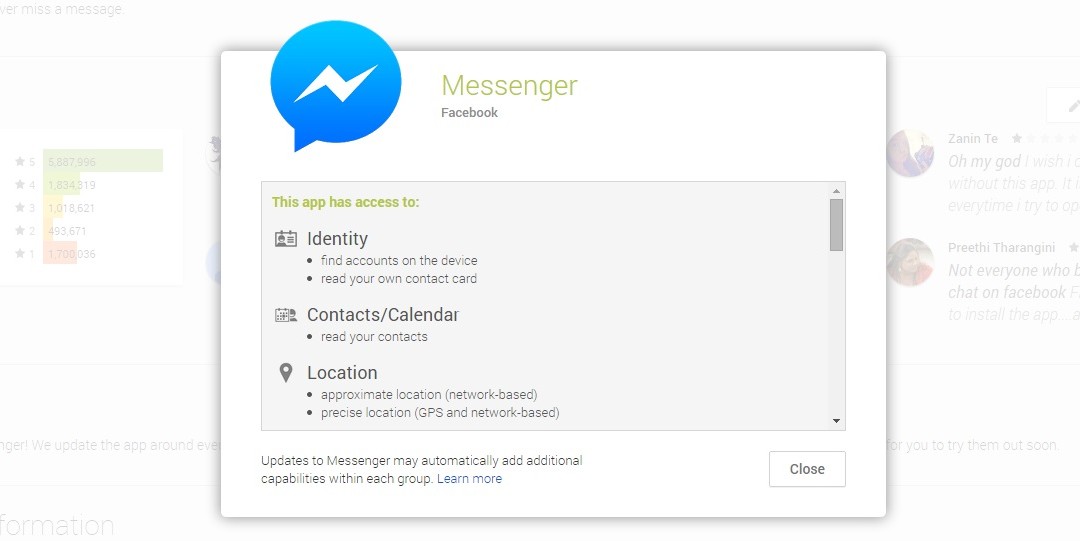 There have been a number of concerns about Facebook’s new “Messenger” app for smartphones and tablets. Most of them are related to additional permissions that Messenger needs with a new version of the app, and the fact that Facebook is forcing users to download it by removing messaging features from their regular app.

If you aren’t aware, the Messenger app now requires permission to access your camera, microphone, contacts, call history, text messages, and location, among other things. Considering that we carry mobile devices with us, that extent of control is unnerving (particularly something like microphone access). So has Facebook Messenger turned into the latest spyware app? Well, yes and no. Facebook has always made money from your personal data, by selling it to advertisers. Facebook builds a profile of information you put in your profile as well as how you interact with content on the site. If your hometown is listed as Charlotte, Michigan and you share statuses about your new dog, Facebook may show you a Purina ad noting that puppy chow is available downtown at Soldan’s.

Personally, I like seeing relevant ads–or no ads at all (checkout Ad Block Plus). But Facebook’s legal privacy invasions are part of it’s whole service–not specifically the Messenger app. You agree to let Facebook use your information for advertising when you agree to the terms of service. Facebook does collect information from Messenger–like who your closest friends are. But it’s not adding the extra permissions to eavesdrop on you all day.

There’s a corporate battle going on between Facebook, Google, Microsoft, and Apple over communication apps. Facebook, of course, has Messenger. Google has an extremely powerful system called Hangouts that’s a union of Google Talk, Google Voice, and Google +’s video chat features. Microsoft recently bought Skype for 8.5 Billion, and now has a strong contender in the race. Apple has their proprietary but solid Facetime app. Both Hangouts and Skype already have one big feature that Messenger just added in the latest refresh–they can make real phone calls, to real phones.

So that’s the short reason why Messenger now needs access to your microphone–it can transmit your voice when you make a call. And access to your text messages, so it can text your Facebook friends on your behalf. And don’t forget the ability to take and view pictures so you can share them with your friends in Messenger. Secondly, I believe Facebook is forcing users to download messenger because the functionality is distinct, and they don’t want to reinvent the wheel in the regular Facebook app. It’s like how Hangouts and Google + are separate apps, or how Skype is an additional download and not built into Windows (yet).

Should you install the Messenger app on your device? It’s up to you, and how much distance you want from Facebook. If it helps, the verdict for me was to install and enjoy.